Have you tried blank supplements? It’s supposed to help you get pregnant.

If there is a supplement out there that did what it promised, I would know about it. The infertility community, especially the online infertility community, is crazy well researched. We can spout off stats, treatment options, test results and opinions like you wouldn’t believe. We are girls who know not only what the doctor is going to say before you see him, but we’ve researched it to high heaven, have created a pro/con list and have pages of questions.

Not only would I know about a miracle supplement if it existed, but mixing supplements and high powered fertility medicine is not a good idea. At the very least, talk to your doctor first.

So don’t say this, there’s nothing to be gained by this question/suggestion.

This is a tough one. You’re having a baby and you’re super excited about it. I get that. I’m happy for you. I’m also sad, sad, sad for me. Regardless of how you announce your pregnancy, it’s always like a blow to the head, unexpected and crushing. A reminder of what I don’t have.

So what’s the best way to announce your pregnancy to someone dealing with infertility? Slowly, allowing for sufficient processing time. If you’re close with the person, chances are that they probably know if your pregnancy was planned or not. A planned pregnancy is easier to deal with because everyone knew it was coming. Eventually. An unplanned, out of the blue pregnancy announcement is hard. On both parties. Do your best to be sensitive and once again, allow time for processing.

I am a fan of announcing a pregnancy via email. Not to everyone, but to those that might have a hard time with the news. Email allows me to have my reaction, whatever it may be, by myself. I control when I can/want to respond. The extra processing time is a godsend.

It’s a crappy experience for everyone involved. Sensitivity goes a long, long way.

There’s a baby shower going on today at work. I was feeling bad that I didn’t think that I could go. I put in money and signed the card but anything baby shower related is too painful for me. Then I feel bad. Then I feel sad. It’s a cycle, one that repeats itself all day.

Really though, why would I do something that hurts so much? No one will care. There will be plenty of people there and I’m sure that I won’t be missed. I just tried to explain why I won’t be able to participate and got a really, really insensitive response. People just don’t understand. But I knew that already.

Don’t go. If it hurts, don’t do it. Since we know that the understanding is just not there, don’t attempt to explain unless you are asked. Just don’t go. If anyone is upset you can tell them that it is too painful. No more, no less. Anyone who doesn’t get it is pretty damn thick. I don’t see an upside to going. The only downside is that I don’t get a cupcake. Oh well. I’ll live.

Infertility and recurrent pregnancy loss has stolen a lot from me. I was just thinking today that I will never again see a positive pregnancy test and be happy like I was the first time. That was a wonderful time. The testing like crazy, watching the line get darker and taking lots of pictures to send to my mother-in-law. After we lost that baby, every other positive test has been met with fear. And usually, “Oh shit.”

I just want to have that first feeling again. I want Joe to have it too. It’s one of the many things that this journey has stolen from us.

I’m just going to flat out say it. Unless you have suffered a miscarriage yourself, the majority of your expressions of condolence are going to be hurtful. It is one of those things that has to be experienced. Most people are so well meaning but in the moment, as the tears are welling up, you just want to scream at them.

Don’t say this after a first miscarriage:

At least you know you can get pregnant.

Is that supposed to make me feel better? Like yay, my baby died! At least I can maybe, possibly, have a replacement baby and everything will be great?
What if I want this baby?
You might have been able to get pregnant but now you have no idea if you can carry a baby to term.

We were elated during our first pregnancy. Almost 9 weeks of bliss. And then the bleeding started. I am forever altered because of that experience. It was a slow, drawn out miscarriage. Our little one’s heart just kept slowing down at each ultrasound until it stopped. But yay, at least I knew that I could get pregnant. And lose a baby. A child.

Would you say it to a person who lost their 5 year old? Well, at least you know that you can have another child. Regardless of how far along you are, your baby is a child. Your child. Who died.

Before offering your condolences to someone who has had a miscarriage, ask yourself this question: Would I say this to a woman who lost her 5 year old?
If the answer is no, don’t say it.

The best thing that someone has ever said to me after a loss? This fucking sucks dude. I’m really sorry.

I shared this blog with a friend. She responded that it is sure full of hurt. Yep, guilty on that one.

I am having to very consciously censor myself in a lot of these posts. While it’s therapeutic to throw everything out on the table, I have to remember my true intentions: Dear Fertile People, things an infertile girl wants you to know.

It’s things that I want you to know.

This happens to me yearly. It is the epitome of don’t say this.

You should volunteer to work over the Christmas holiday because you don’t have kids.
Those of us with kids would like to spend the holidays with them.

This makes my blood boil. Then I cry because it is everything that people don’t understand about being infertile condensed into two sentences.

The fact we shouldn’t ignore is that I have a family too. My husband and I have created our own version of a family and it is very important to me. While the fertile people are at home celebrating the season with their children, we are hunkering down in one of the most painful times of the year. Everything is merry and bright. For you. Not for us. For us the season brings sadness from lost dreams. From traditions that we always wanted to share with more than just the two of us.

You should volunteer to work over the Christmas holiday because you don’t have kids.
Those of us with kids would like to spend the holidays with them.

In response, I just quietly asked if my six dead babies count. This is a conversation stopper that makes people very uncomfortable and I don’t feel the least bit bad about it.

So don’t say this. Instead, you could just ask are you guys going away over the holidays or staying in town? Regardless, I hope you have a restful holiday.

They are not the same. Childless people often get lumped into the childfree group and we really don’t belong there.

Childfree is a movement. It is choosing to not have kids for social, economic, and/or environmental reasons. I can get behind some of it. If you don’t want children, don’t have children. Kudos to you for recognizing that you are better off childfree. The same goes for people who know that they would struggle financially or are too career oriented. All good reasons to be childfree. I can’t get behind the whole thought that reproducing oneself is the ultimate form of narcissism but whatev, the less unwanted children born the better.

Childlessness is not a movement. Childlessness is involuntary. It is thrust upon you and you will spend the rest of your life picking up the pieces. Life purposes and dreams are stripped away and you are left with grief and sorrow. Marriages often don’t survive. Infertility steals from all areas of your life until one day you’re 34 and you don’t recognize the life you are living.

You are not a doctor. Please don’t play one.

There isn’t much worse than a person pretending that they know what they are talking about when they clearly don’t.

Why don’t you just do IVF?

Don’t say this. It’s ignorant. IVF is not the be all and end all of fertility treatments. IVF doesn’t work in cases of unexplained infertility or in people that just don’t ovulate, even with meds. It’s also dangerous for someone like me who has polycystic ovaries. Even massive amounts of hormone injections do not get my stubborn ovaries to produce any follicles. We run the risk of Ovarian Hyperstimulation Syndrome (OHSS) if we just keep dosing up and up. OHSS can be fatal.

Multiples are a very real concern with IVF.

IVF is rife with difficult decisions. How many follicles are too many? Not enough, should we cancel the cycle? How many embryos should we transfer? What are our beliefs on selective reduction should we conceive high order multiples? What do we do with the left over frozen embryos? Do we store them indefinitely ($$)? Or donate them? Or destroy them?

So yeah, it’s not “just doing IVF“. Don’t say that. Instead you could say, I’m sure that these treatment decisions are really hard to make. I’m here if you need to talk. Can I bring you a pie? Or some brownies?

Congratulations, you have functioning ovaries! Have a super special parking spot. 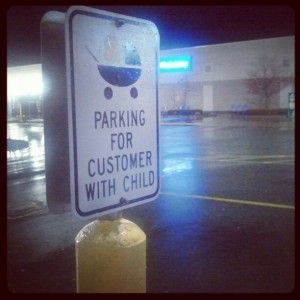 I will be in the back of the lot, not part of the club.